I’m still looking for the perfect XBMC hardware; must be small, silent, low power, low heat, 1080p, HD audio, and play anything I throw at it without a hiccup. The number of options are increasing, but no clear winner.

I previously tested a XIOS DS running XBMC on Android, and XBMC on Linux. At that time the builds were pretty unstable. I retested the latest Linux builds, that also include XBMC 12 Frodo RC2.

I tested using the 121512 release, after rebooting, I just saw a black screen. I could see that the AVR had negotiated HDMI audio, but the screen remained black. Reading the forum thread there were many reports of similar problems, same symptoms, leave the system up, and after 15 minutes XBMC loaded. The bug has been identified, but not yet fixed in official firmware. I used a community build that included the fix, and the system booted normally.

I noticed that there are now two hardware variants of the DS, a M1 version, that I have, and a new M3 version, that apparently includes a faster processor and more memory, and is currently only shipped in the EU and UK. This seems to be consistent with the AMLogic AML8726-M SoC device containing an ARM Cortex-A9 and a Mali-400 graphic processor.

The playback results were rather disappointing, no HD audio pass-through, high bitrate content would stutter, and I would get frequent network re-buffering. This device still shows promise, but not in its current state.

I tested XBMC on a Raspberry Pi. The Pi devices are pretty cheap at $35, but the units at this price have very long lead times. Instead I opted to buy an in-stock Model B Revision 2 unit from Amazon, and also a case.

Deploying XBMC to a Pi is rather more involved compared to the DS, and I opted to use the Raspbmc distribution that includes easy to use tools for Windows. The deployment tool creates a bootable SD card, that then retrieves and installs the latest builds over the internet, similar to many Linux network boot disk installers.

The playback results were rather disappointing, no HD audio support, high bitrate content would stutter, and I would get very frequent network re-buffering.

Similar to openELEC that provides a XBMC plugin for OS configuration, Raspbmc configuration in XBMC is done using the Raspbmc plugin. When I first clicked the plugin I thought it did nothing, and after several more remote clicks it suddenly displayed and did whatever my remote clicks did, causing a restart. The plugin provides lots of configuration options, including switching of XBMC versions, downloading and running nightly builds, and advanced configuration, but really it is super slow to load up.

XBMC on the DS supported HD audio passthrough, but Raspbmc did not include HD audio support. The plugin allowed me to enable the XBMC AudioEngine, with a warning that it may not work. After restarting XBMC with AE enabled, there were options for HD audio, but AE did not detect the HDMI audio output device and only offered audio output over analog or SPDIF.

MPEG2 and VC-1 codecs have to be purchased for the Pi, but as my test results were disappointing, I did not bother purchasing the codecs.

I tested one of the new Intel Next Unit of Computing devices, specifically the DC3217IYE. The device is barebones, and I used Kingston KVR16S11K2/16 16GB memory and a Kingston SMS100S2/64G 64GB mSATA card. Oh, and you need your own power cable, I happened to have a spare Monoprice 7687 3-prong power cable lying around that fit the PSU.

I don’t know what to make of it, but Intel included a gadget in the box, that plays the Intel jingle every time you open the box. I’m inclined to think that they could have included a power cable instead of the jingle gadget, but my kids do enjoy playing with the box, so it may have some marketing value.

Here are a few unboxing pictures: 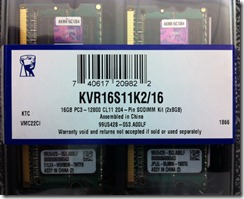 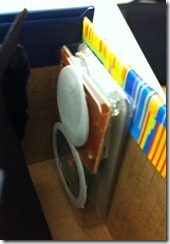 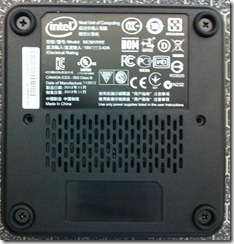 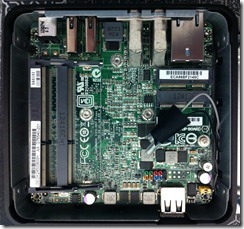 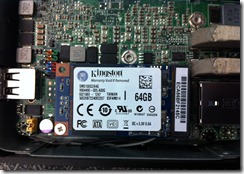 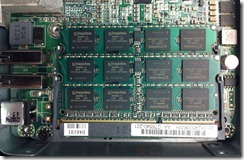 Most things worked fine, audio output device was automatically detected and set to HDMI, but HD audio passthrough did not work, and several videos showed artifacts during playback, even worse, some videos caused lots of artifacts and caused the device to hang. I assume the video issue is a problem with the Intel HD graphics driver being picked up by openELEC.

I am using a D-Link DSM-22 RF remote (I wish I can find more for sale), and I found that the key presses were erratic, after moving the RF dongle from a rear USB port to the front USB port, everything worked fine. I assume there is some interference near the back of the unit.

Physical size wise the NUC compares well against a Zotac ZBox Nano XS AD11 Plus, but price wise the NUC is more expensive once memory and flash storage is added.

The Nano XS is a Fusion based device, which means it will never get HD audio passthrough (AMD drivers lack HD audio support on Linux), so if openELEC and Intel can resolve the video corruption on the NUC, and XBMC can resolve the HD passthrough problem with my setup, the NUC would be a good contender.

I am still running openELEC on my Zotac ZBOX ID84 system with a NVidia GeForce GT520M GPU. This GPU supports HD audio passthrough, but as with my other devices, it does not work on my setup. The problem appears to be related to how XBMC AudioEngine targets audio, and that instead of sending the audio to the AVR, it sends it to the television, but this is speculation on my part. I logged a ticket with openELEC and XBMC, and there is a forum thread at openELEC with other Yamaha and Onkyo AVR users reporting similar problems, but nobody from openELEC or XBMC has yet responded 😦

Here is a comparison of device sizes, top is Raspberry Pi, then XIOS DS, then ZBOX AD11, then Intel NUC, and ZBOX ID84 at the bottom: 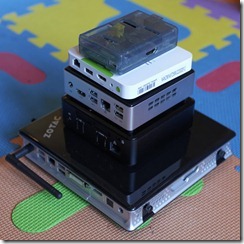 thank you for sharing! I have not actually been able to purchase and test devices (streamers, RBP and such) as they are too expensive or unavailable where I live. I have been following a seriers of articles on the topic at anandtech:
http://www.anandtech.com/show/5906/amd-llano-htpc-builders-guide

Were you able to resolve the issue with the artifacts on the NUC ? Looking forward to buy one of these and install Openelec XBMC. (Disabling DXVA may help ?)

Video played fine using XBMCbuntu RC2, so I assume it is an issue with the Intel graphic driver included in openELEC Beta 6. I will test openELEC RC1 this weekend and report back.

Thanks, I’ll go for the NUC. Performance wise the best option I think. Maybe I’ll wait for the i5 version …

Thanks! One question: The NUC doesn’t have any audio optical output? So we need to buy an extra usb audio card?

hi! do you still have the problems with the new version? and you post a follow up on that bug?

I bit the bullet and purchased a cheapo China special Celeron 1037U system, it runs OpenELEC perfectly, passively cooled, and performs better than my Celeron 847 NUC.

Well, did you tried win 8 enterprise on the NUC?! and now with XBMC 13 Gotham Beta2?!
I already have made one with dc3217by and win 8.1 Pro, but that one is amazing fast!
I have installed a kingston 2Gb DDR3 memory and 60Gb Kingston mSata SSD disk.
It really rocks!! i mean really rocks! I am using VPN, and i stream everything over the internet with it from my private server (that’s why i need vpn) locally i can play 1080p content, and even tested the 1080p 3D Half-SBS movies! they really play so well! ofcoarse, it’s an i3 Intel Core inside!

So, now my next test, is to make it a bit cheaper.. because de Intel NUC DN2820FYKH, has a gigabit adapter and wifi in it! so.. i just need an 30Gb SSD and 2Gb of memory on it.
There is also an IR sensor in it, that’s why it is cheaper than the i3 NUC version. it only has 3 usb, no wifi, no lan.. You need extra usb accesoiries.. When you want it to be like a home media center to boot, instead of win 8, you can use XBMC Launcher to fix it!

For me, i needed the VPN first, before it starts XBMC. That i managed to rewrite some code of the XBMCLauncher to fix that problem! so..

But the next thing i want to test also, is what does the NUC do with openelec or xbmcbuntu?
does it really perform the same as on windows 8?

by the way, when you install a windows 8.1 enterprise, it only needs about 11Gb for installation.. that’s inclusive the XBMC installation. When you go Pro 8.1, it already grows to 32Gb, and you need a bigger SSD disk.

Hi Pieter. Thanks for your many benchmarks (especially on synology’s iscsi and LAG performance on 1 to 1 transfers that saves me time reconfiguring a very similar setup to yours). Just to point you to the cubox-i pro, I recently got 2 and – although I had to attach an USB fan and setup a cron job to switch usb power based on cputemp – I’m very happy with their performance and form factor, no stuttering on full hd and sql library really + watchedlist allowed me to move away for my desktop pc, which I failed a few times before. Also I started using vms and my next purchase will be a 4k ready qnap with raid 0 ssd, so again many thanks for sharing your experiences!