I have been happy with my server rack running my UniFi network equipment and two Windows Server 2016 (W2K16) instances. I use the servers for archiving my media collection and running Hyper-V for all sorts of home projects and work related experiments. But, time moves on, one can never have enough storage, and technology changes. So I set about a path that lead to me replacing my W2K16 servers with Unraid.

I currently use Adaptec 7805Q and 81605ZQ RAID cards, with a mixture of SSD for caching, SSD RAID1 for boot and VM images, and HDD RAID6 for the large media storage array. The setup has been solid, and although I’ve had both SSD and HDD failures, the hot spares kicked in, and I replaced the failed drives with new hot spares, no data lost.

For my large RAID6 media array I used lots of HGST 4TB Ultrastar (enterprise) and Deskstar (consumer) drives, but I am out of open slots in my 24-bay 4U case, so adding more storage has become a problem. I can replace the 4TB drives with larger drives, but in order to expand the RAID6 volume without loosing data, I need to replace all disks in the array, one-by-one, rebuilding parity in between every drive upgrade, and then expand the volume. This will be very expensive, take a very long time, and risk the data during during every drive rebuild.

I have been looking for more flexible provisioning solutions, including Unraid, FreeNAS, OpenMediaVault, Storage Spaces, and Storage Spaces Direct. I am not just looking for dynamic storage, I also want a system that can run VM’s, and Docker containers, I want it to work with consumer and or small business hardware, and I do not want to spend all my time messing around in a CLI.

I have tried Storage Spaces with limited success, but that was a long time ago. Storage Spaces Direct offers significant improvements, but with more stringent enterprise hardware requirements, that would make it too costly and complicated for my home use.

FreeNAS offers the best storage capabilities, but I found the VM and Docker ecosystem to be an afterthought and still lacking.

OpenMediaVault (OMV) is a relative newcomer, the web front-end is modern, think of OMV as Facebook and FreeNAS and Unraid as MySpace, with growing support for VM’s and Docker. Compared to FreeNAS and Unraid the OMV community is still very small, and I was reluctant to entrust my data to it.

Unraid offered a good balance between storage, VM, and Docker, with a large support community. Unlike FreeNAS and OMV, Unraid is not free, but the price is low enough.

An ideal solution would have been the storage flexibility offered by FreeNAS, the docker and VM app ecosystem offered by Unraid, and the UI of OMV. Since that does not exist, I opted to go with Unraid.

Picking a replacement OS was one problem, but moving the existing systems to run on it, without loosing data or workloads, quite another. I decided to convert the two servers one at a time, so I moved all the Hyper-V workloads from Server-2 with the 8-bay chassis, to Server-1 with the 24-bay chassis. This left Server-1 unused, and I could go about converting it to Unraid. I not only had to install Unraid, I also had to provision enough storage in the 8-bay chassis to hold all the data from the 24-bay chassis, so that I could then move the data on Server-1 to Server-2, convert Server-1 to Unraid, and move the data back to Server-1. And I had to do this without risking the data, and without an extended outage.

To get all the data from Server-1 to fit on Server-2, I pruned the near 60TB set down to around 40TB. You know how it works, no matter how much storage you have it will always be filled. I purchased 4 x 12TB Seagate IronWolf ST12000VN0007 drives, and combined with 2 x 4TB HGST drives, gave me around 44TB of of usable storage space, enough to copy all the important data from Server-1 to Server-2.

While I was at it, I decided to upgrade the IPMI firmware, motherboard BIOS, and RAID controller firmware. I knew it is possible to upgrade the SuperMicro BIOS through IPMI, but you have to buy a per-motherboard locked Out-of-Band feature key from SuperMicro to enable this, something I had never bothered doing. While looking for a way to buy a code online, I found an interesting post describing a method of creating my own activation keys, and it worked.

IPMI updated, motherboard BIOS updated, RAID firmware updated, I set about converting the Adaptec RAID controller from RAID to HBA mode. Unlike the LSI controllers that need to be re-flashed with IR or IT firmware to change modes, the Adaptec controller allows this configuration via the controller BIOS. In order to change modes, all drives have to be uninitialized, but there were two drives that I could not uninitialize. After some troubleshooting I discovered that it is not possible to delete MaxCache arrays from the BIOS. I had to boot using the Adaptec bootUSB Utility, that is a Linux bootable image that runs the MaxView storage controller GUI. MaxCache volumes deleted, I could convert to HBA mode. 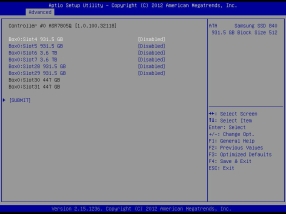 With the controller in HBA mode, I set about installing Unraid, well, it is not really installing in the classic sense, Unraid runs from a USB drive, and all drives in the system are used for storage. There are lots of info online on installing and configuring Unraid, but I found very good info on the Spaceinvader One Youtube channel. I have seen some reports of issues with USB drives, but I had no problems using a SanDisk Cruzer Fit drive.

It took a couple iterations before I was happy with the setup, and here are a few important things I learned:

I still have a few days of file copying left, and I will keep my W2K16 server operational until I am confident in the integrity and performance of Unraid. When I’m ready, I’ll convert the second server to Unraid, and then re-balance the storage, VM, and Docker workloads between the two servers.

[…] my last post I described how I converted one of my W2K16 servers to Unraid, and how I am preparing for […]

[…] my last two posts I described how I migrated from W2K16 and hardware RAID6 to Unraid. Now that I’ve […]

[…] I had to do when I moved from Windows Server 2016 to Unraid, the critical parts are data migration, and I had quite a lot of data to move from Unraid to PVE. I […]