This post started with a quick experiment, but after hardware incompatibilities forced me to swap SSD drives, and subsequently losing a data volume, it turned into a much bigger effort.

My two Unraid servers have been running nonstop without any issues for many months, last I looked the uptime on v6.7.2 was around 240 days. We recently experienced an extended power failure, and I noticed 5 parity errors, on both servers, after the servers were restarted.

I initially suspected that a dirty shutdown caused the corruption, but my entire rack is on a large UPS, and the servers are configured, and tested, to cleanly shutdown in case of a low battery condition. Unfortunately Unraid does not persist logs across reboots, so it was impossible to verify the shutdown behavior via logs. Unraid logs to memory and not to the USB flash drive to prevent flash wear, but I think this needs to be at least configurable, as no logs means troubleshooting after an unexpected reboot is near impossible. Yes, I know I can enable the Unraid syslog server, and I can redirect syslog to write to the flash drive, but syslog is not as reliable or complete as native logging, especially during a shutdown scenario, but more importantly, syslog was not enabled, so no shutdown logs.

I could not entirely rule out a dirty shutdown, but I could test a clean reboot scenario. I restarted from within Unraid, ran a parity check, same exact 5 parity errors were back, ran a parity check again, and clean. It takes more than a day to run a single parity check, so this is a cumbersome and time consuming exercise. It is  very suspicious that it is exactly the same 5 sectors, every time.

I searched the Unraid forums, and I found that there are other reports of similar repeat parity errors. In some instances attributed to a Marvel chipset, or a Supermicro AOC-SASLP-MV8 controller, or the SASLP2 driver. My systems use Adaptec RAID cards, 7805Q SAS2 and 81605ZQ SAS3, in HBA mode, so no Marvel chipset and no SASLP2 driver, but the same symptoms.

An all too common forum reply to storage problems is to switch to a LSI HBA, and I got the same reply when I reported the parity problem with my Adaptec hardware.

I was sceptical, causation vs. correlation. As example, take the SQLite corruption bug introduced in v6.7 and for the longest time it was blamed on hardware or 3rd party apps, but it eventually turns out to be an Unraid bug.

Arguing my case on a community support forum is not productive, and I just want the parity problem resolved, so I decided to switch to LSI HBA cards. I really do have a love hate relationship with community support, especially when I pay for a product, like Unraid or Plex Pass, but have no avenue to dedicated support.

I am no stranger to LSI cards, and the problems flashing from IR to IT mode firmware, so I got my LSI cards preflashed with the latest IT mode firmware at the Art of Server eBay store. My systems are wired with miniSAS HD SFF-8643 cables, and the only cards offered with miniSAS HD ports were LSI SAS9340-8i ServeRAID M1215 cards. I know the RAID hardware is overkill when using IT mode, and maybe I should have gone for vanilla LSI SAS 9300-8i cards, especially when the the Unraid community was quick to comment that a 9340 is not a “true” HBA. 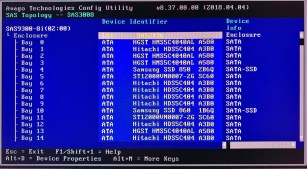 The problem seemed to be limited to my Samsung EVO drives. I reached out to Art of Server for help, and although he was very responsive, he had not seen or heard of this problem. I looked at the LSI hardware compatibility list, and the EVO drives were listed. Some more searching, and I found a LSI KB article mentioning TRIM support not being supported on Samsung Pro 850 drives. It seems that the LSI HBA’s need TRIM to support DRAT (Deterministic Read After TRIM) / (Data Set Management TRIM supported (limit 8 blocks)), and RZAT (Deterministic read ZEROs after TRIM). The Wikipedia article on TRIM mentions specific drives for faulty TRIM implementations, including the Samsung 840 and 850 (without specifying Pro or EVO), and the Linux kernel has special handling for Samsung 840 and 850 drives.

This is all still circumstantial, as it does not explain why the LSI controller would not mount the 840 EVO drives, but will mount the 850 Pro drive, when both are listed as problematic, and both are included on the LSI hardware compatibility list. I do not have EVO 850’s to test with, so I can not confirm if the problem is limited to EVO 840’s.

I still had the original parity problem to deal with, and to verify that a LSI HBA will resolve the problem, so I needed a working Unraid with LSI HBA system. Server-1 had two EVO 840’s, a 850 Pro, and a 860 Pro for the BTRFS cache volume. I pulled a Pro 850 and a Pro 860 drive from another system, and proceeded to replace the two EVO 840’s. Per the Unraid FAQ, I should be able to replace the drives one at a time, waiting for the BTRFS volume to rebuild. I replaced the first disk, it took about a day to rebuild, I replaced the second disk using the same procedure, but something went wrong, and my cache volume would not mount, and reported being corrupt.

In retrospect I should have known something was wrong when Unraid reported the array being stopped, but I still saw lots of disk activity on the SSD drive bay lights. I suspect the BTRFS rebuild was still ongoing, or mounted, even if Unraid reported the array being stopped. No problem, I thought, I make daily data backups to Backblaze B2 using Duplicacy, and weekly Unraid (appdata and docker) backups, that are then backed up to B2. I recreated the cache volume, and got the server started again, but my Unraid data backups were missing.

So a few key learnings: do not use the cache for backup storage, schedule offsite backups to run after onsite backups, and if the lights are still blinking don’t pull the disk.

Once I had all the drives installed, I tested for TRIM support.

Samsung EVO 840, supports DRAT, but does not work with the LSI HBA:

Server-2 uses SFF-8643 to SATA breakout cables with sideband SGPIO connectors, controlling the drive bay lights. With the Adaptec controller the drive bay lights worked fine, but with the LSI the lights do not appear to work. I am really tempted to replace the chassis with a SAS expander, alleviating the need for the breakout cables, but that is a project for another day.

After I recreated the cache volume, reinstalled the Duplicacy web container and tried to restore my now week old backup file. I could not get the web UI to restore the 240GB backup file, either the session timed out or the network connection was dropped. I reverted to using the CLI, and with a few retries, eventually restored the file. It was disappointing to learn that the web UI must remain open during the restore, and that the CLI does not automatically retry on network failures. Fortunately Duplicacy will do block-based restores and can resume restoring large files.

I did lose my DW-Spectrum IPVMS running on an Ubuntu Server VM. I’ve known that I don’t have a VM backup solution, but the video footage is on the storage server not in the VM, video backups go to B2, and it is reasonably easy to recreate the VM. I am still working on a DW-Spectrum docker solution for Unraid, but as of today the VMS does not recognize Unraid mapped storage volumes.

After all this trouble, I could finally test a parity check after reboot with the LSI HBA.  With the system up I ran a parity check, all clear, rebooted, ran the parity check again, and … no errors. I performed this operation on both servers, no problems.

I was really sceptical that the LSI would work where the Adaptec failed, and this does not rule out Unraid as the cause, but it does show that Unraid with the LSI HBA does not have the dirty parity on reboot problem.